Statement + Protest Against Westminster Government Deportation of Refugees to Rwanda 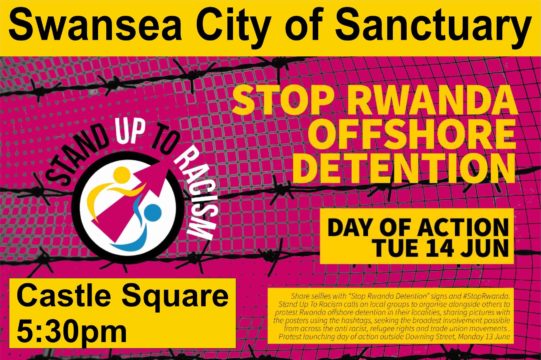 PLEASE JOIN US TO AFFIRM THAT WE REJECT THE IMMORAL AND INHUMANE PLAN OF THE WESTMINSTER GOVERNMENT TO SEND ASYLUM SEEKERS TO RWANDA OR ELSEWHERE.

The UK Government has stated that it will start sending people seeking asylum in the UK to Rwanda. We condemn this immoral and inhumane move and ask the people of Swansea to voice their strong condemnation of this policy.

Swansea has long been a community that welcomes asylum seekers and refugees, regardless of their colour, nationality, ethnicity, religion or the reason why they felt forced to leave their home country.

Swansea City of Sanctuary group is calling on political groups and politicians, religious communities and spiritual leaders, social groups, local community groups and all people of conscience in Swansea to unite with us in raising our voices to condemn this inhumane attempt to deny asylum seekers the right to find sanctuary in the UK. This evil policy not only seeks to nullify a basic human right, but also denies the right of people in the UK, and most particularly in Wales, a Nation of Sanctuary, and in Swansea, a City of Sanctuary, to express solidarity and show compassion to people in great need.

We do not wish to be seen by the world as being citizens of a selfish, insensitive and racist country!

Please show your support for our initiative by joining us and sharing the event.

Demonstration to Protest Against Westminster Government Deportation of Refugees to Rwanda