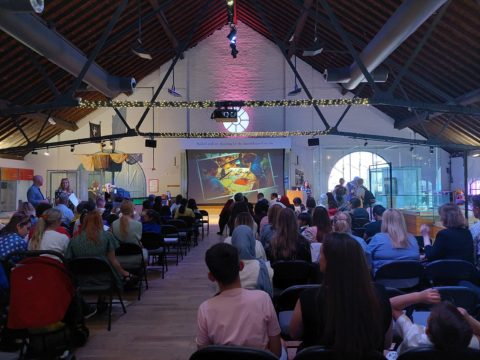 Swansea City of Sanctuary recently organised a celebration for Schools of Sanctuary in Swansea. The event was held on Tuesday 21st June, 2022, at the National Waterfront Museum, Swansea. It included a wide range of speeches and displays presented by the participating schools’ representatives, including students and teachers, on the schools’ efforts to become Schools of Sanctuary.

The celebration started with a film about the Sanctuary Logo Project, which featured the workshop at Glynn Vivian Art Gallery where children from different schools developed the fantastic new Swansea Schools of Sanctuary logo.

Alma Habab, a year 8 pupil in Olchfa Comprehensive School, gave a moving presentation about being a refugee. She referred to her journey after escaping from the scourge of war in Syria with her family, passing through intermediate countries until she reached sanctuary in Swansea, United Kingdom. Alma pointed out the obstacles she met as a student who did not know anything about English. She appreciated the great support she received in Swansea until she was able to overcome the language barriers as well as the kind treatment she received like students born in the UK without any discrimination. 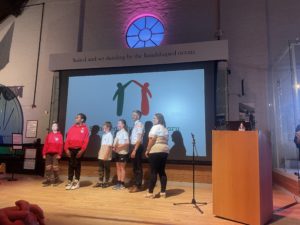 The enthusiasm was evident on the faces of the students who presented short words, poems, and songs about the importance of sanctuary in the school, accepting different students from different cultural and ethnic backgrounds and overcoming the difficulties that might prevent them from being integrated into the school community through the young interpreter programmes and other activities which conducted schools to get the greatest degree of equal acceptance among their students.

The event received many inspirational speeches, such as the speech from Children’s Commissioner for Wales, Rocio Cifuentes, who came to Swansea as a refugee from Chile as a baby and later used to welcome refugees and support them as one of the founders of EYST in 2005, later becoming the director. She was recently appointed as the Children’s Commissioner for Wales and awarded an MBE at the Queen’s Birthday Honours. Councillor Robert Smith, Swansea City Council Cabinet member for education and learning, gave a speech emphasising his support to Swansea City of sanctuary since its early days, and congratulated the award-winning schools.

A huge congratulations and thank you to all the Schools who received awards and contributed their wonderful presentations to the evening, and of course to The National Waterfront Museum for hosting us. All these schools have demonstrated such a commitment to the City of Sanctuary vision, and should all be incredibly proud to be recognised as a place of welcome and inclusion. A short film is currently being made that will cover the whole evening of celebrations.

If you took any photos during this event, please send them to [email protected].