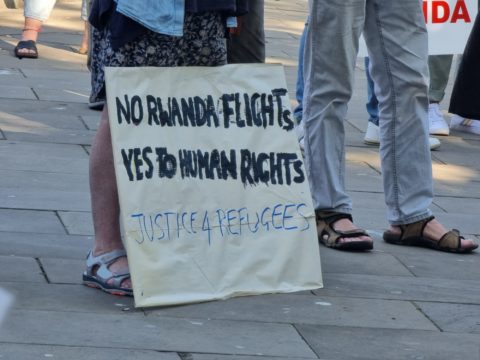 About 150 people attended the rally in Castle Square against deportations to Rwanda
called on Tuesday 14 June by Swansea City of Sanctuary with Stand up to Racism,
Swansea Asylum Seekers Support (SASS) and Unity in Diversity. The day had been
chosen because the first flight taking asylum seekers to Rwanda was scheduled to take off
that evening.

Jose Cifuentes of Swansea City of Sanctuary, himself a refugee from Chile in the 1970s,
acted as MC. He praised the high turnout as showing how Swansea is a genuine City of
Sanctuary, and told of a Turkish asylum seeking family who had recently received refugee
status and had sent a message thanking Swansea people for the welcome they had
received.

There was passionate condemnation of this UK government policy as cruel, divisive,
immoral, racist and illegal from speakers including Rob Stewart, Labour Leader of
Swansea Council, Maggi Bullen, Former Swansea Assistant Education Director, and
representatives of the organizations which called the rally, as well as from Ethnic Youth
Support Team, Unite the Union and Plaid Cymru. Supporting messages were read out
from Geraint Davies, Labour MP for Swansea West, Cllr Mike Day, Liberal Democrat and
current Lord Mayor of Swansea, and Cllr Chris Evans of the Green Party.

Tom Cheesman of SASS told of a local Kurdish family who rejoiced in late May when they
learned that their son, age 19, had crossed the channel after nearly a year separated from
them. Days later they learned he had been detained near Heathrow and served notice of
deportation to Rwanda, and are now suffering unimaginable torment.

A number of refugees also spoke. Max Kpakio, one of the first asylum seekers to be sent
to Swansea almost 20 years ago, gave himself as an example of how refugees are keen to
“give back” to their new communities by volunteering and then employment. Otis Bolamu
mentioned how Rwanda, a small and heavily populated country, is involved in ongoing
conflict in his own country of Democratic Republic of Congo, a source of refugees on both
sides, so is hardly suitable or “safe” as a destination for refugees from the rest of the
world.

Later that evening it was announced that the flight to Rwanda had been cancelled because
of legal challenges and eventually a ruling from the European Court of Human Rights.
However, the UK government seems determined to press on with its policy so it is vital to
continue to oppose it by all possible means.
Following the rally, the organisers are planning to broaden the campaign against Rwanda
deportations. First, a statement will go to as many organizations as possible (SCoS
supporters, churches, mosques, community groups, unions etc.) for them to sign up to.
The aim would be for an even larger public demonstration next time and supporters will be
asked to be ready to mobilise people at short notice.

In the meantime, several national organizations have actions which you can join, and
which continue beyond the immediate success of stopping the flight on 14 June:

“Say it loud, say it clear: Refugees Are Welcome Here!” 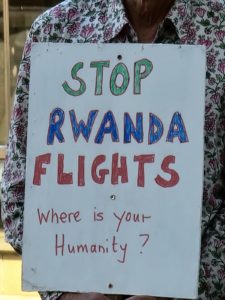 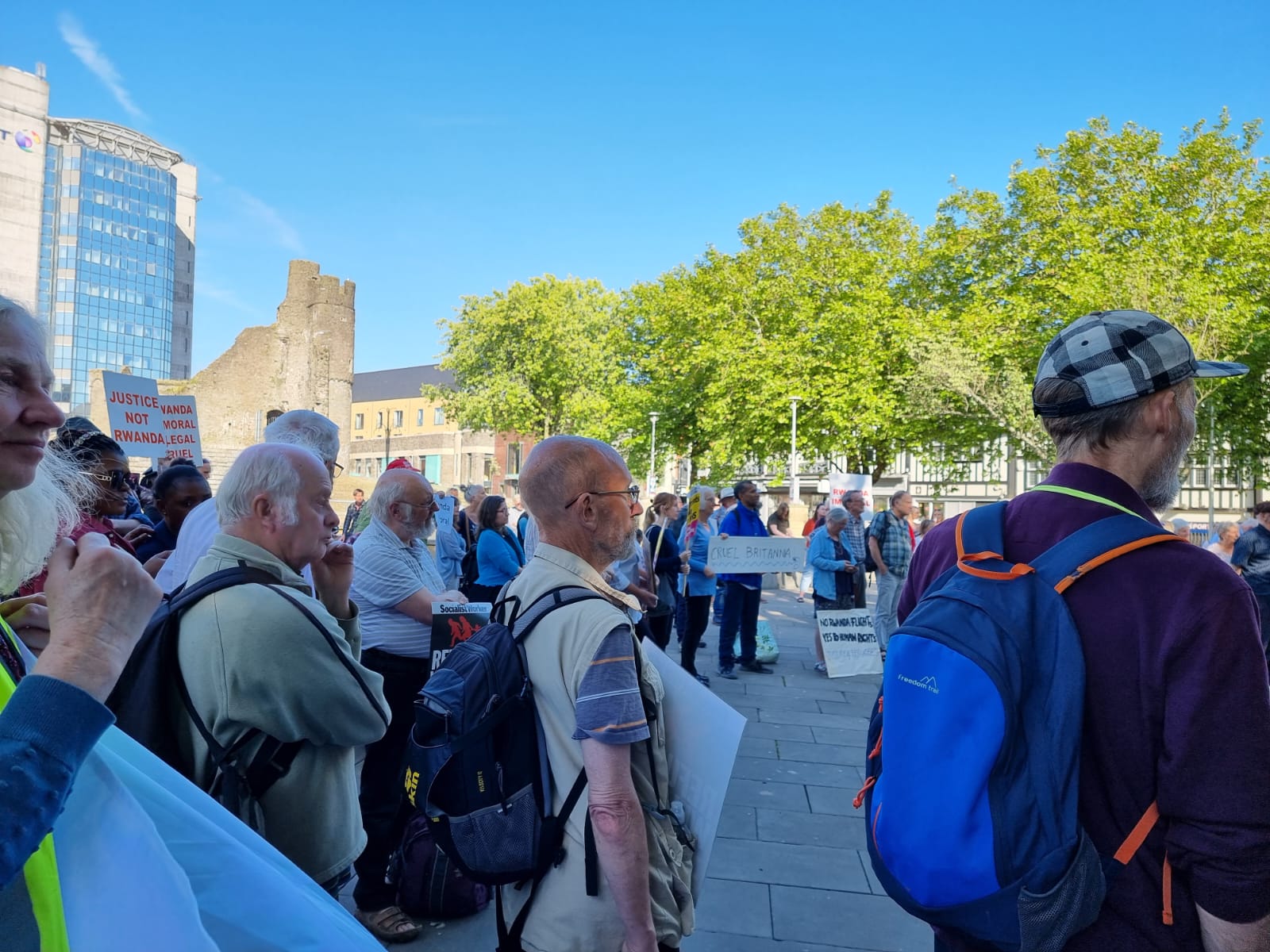 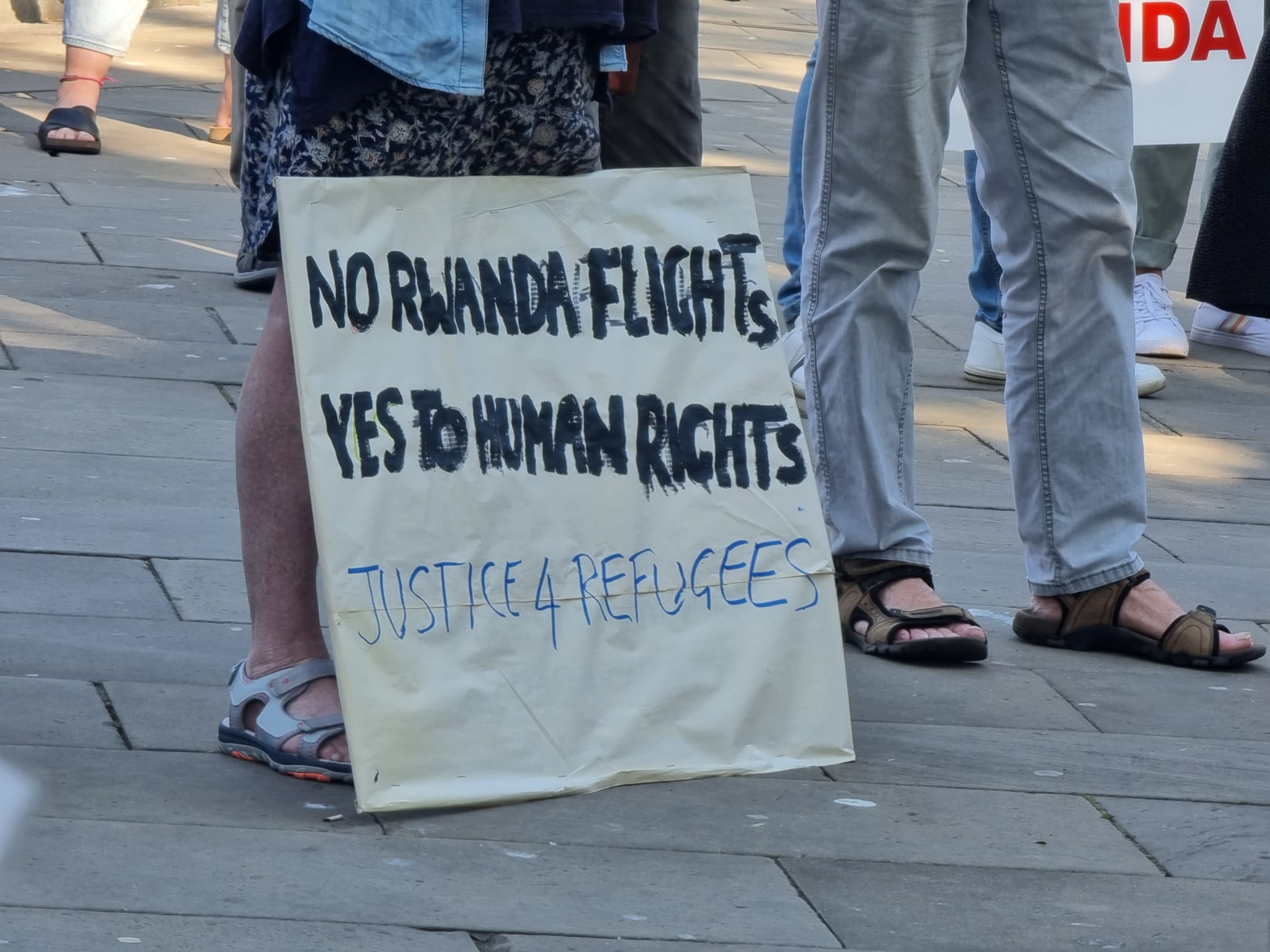 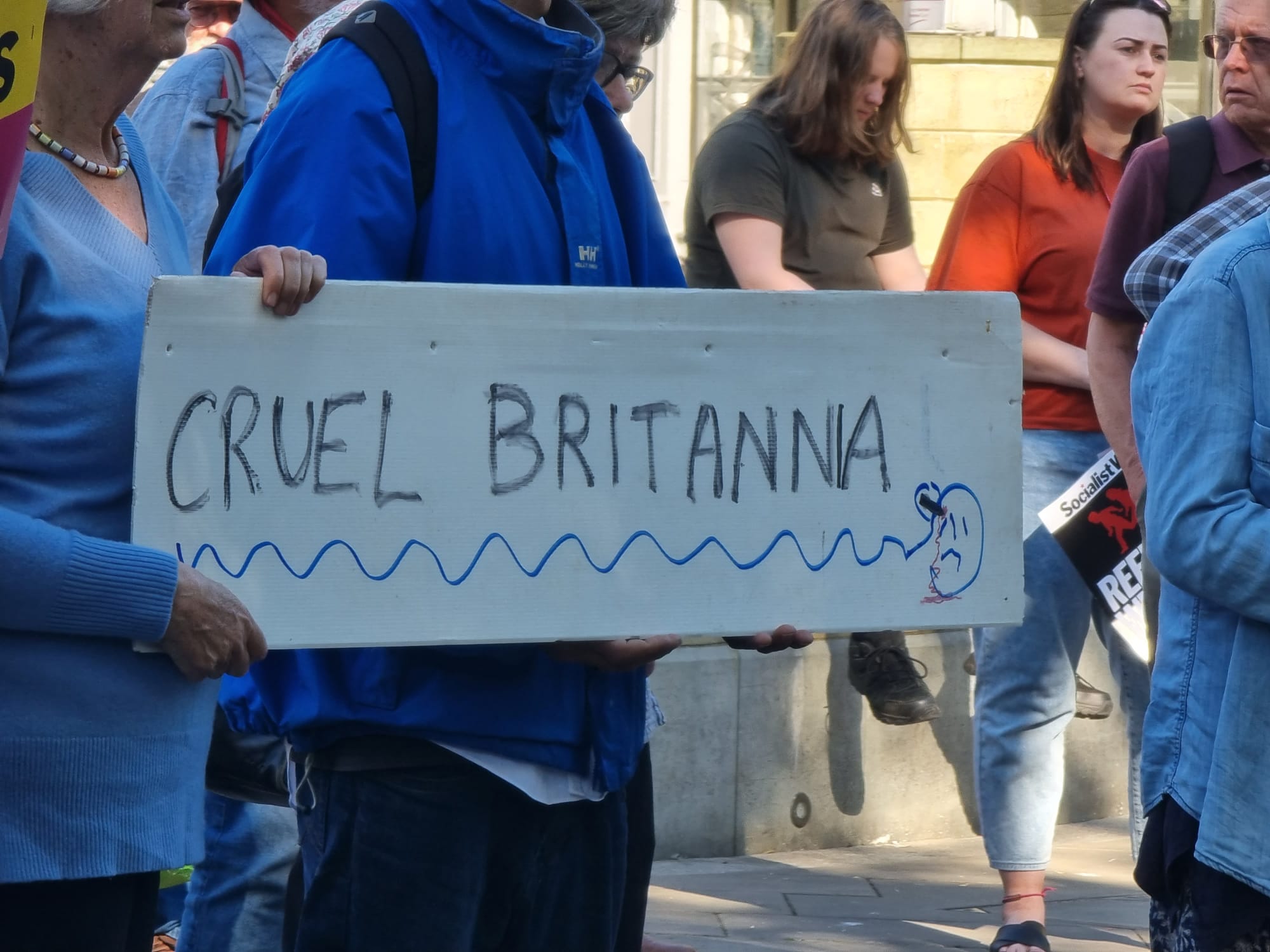 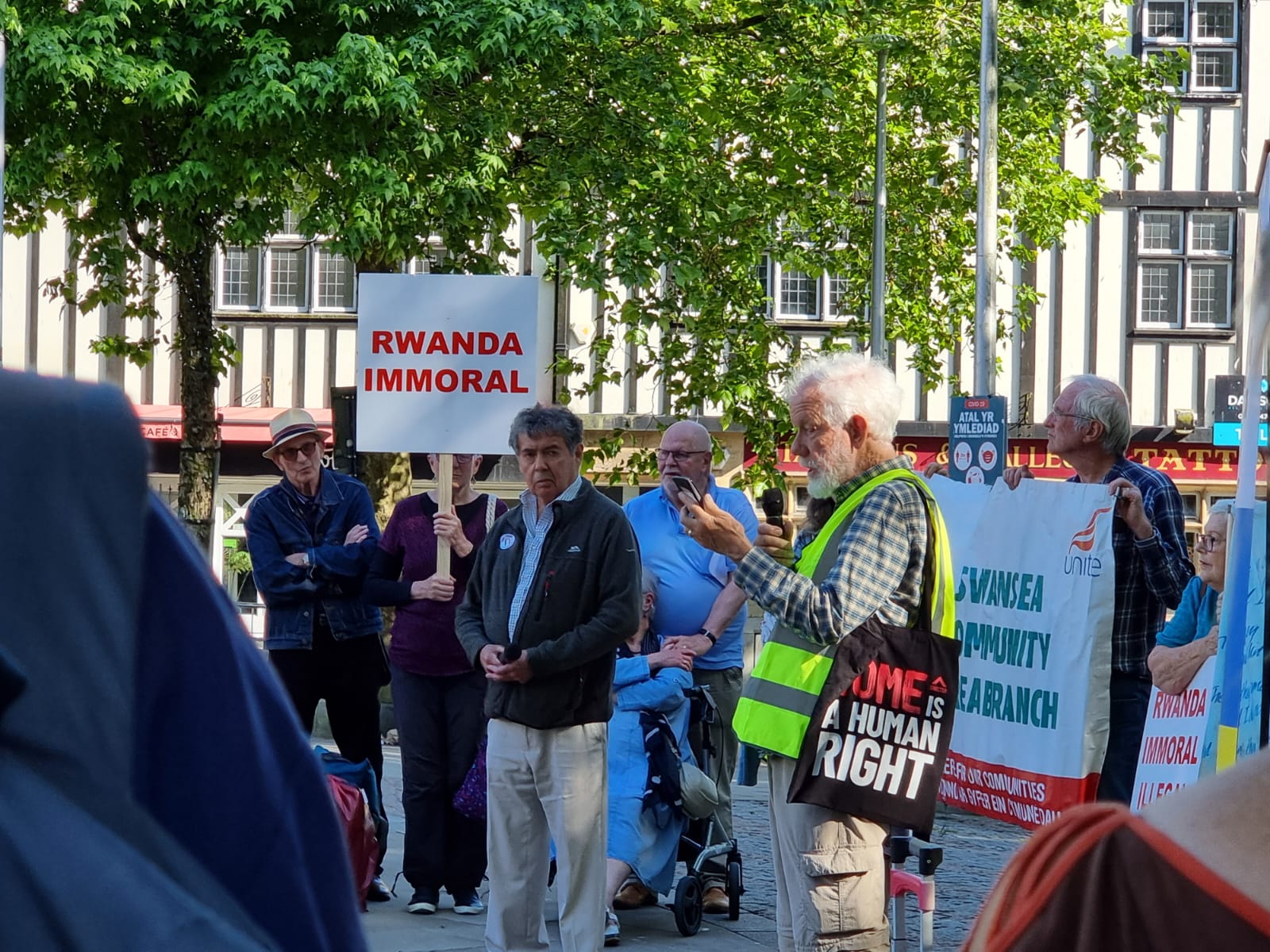 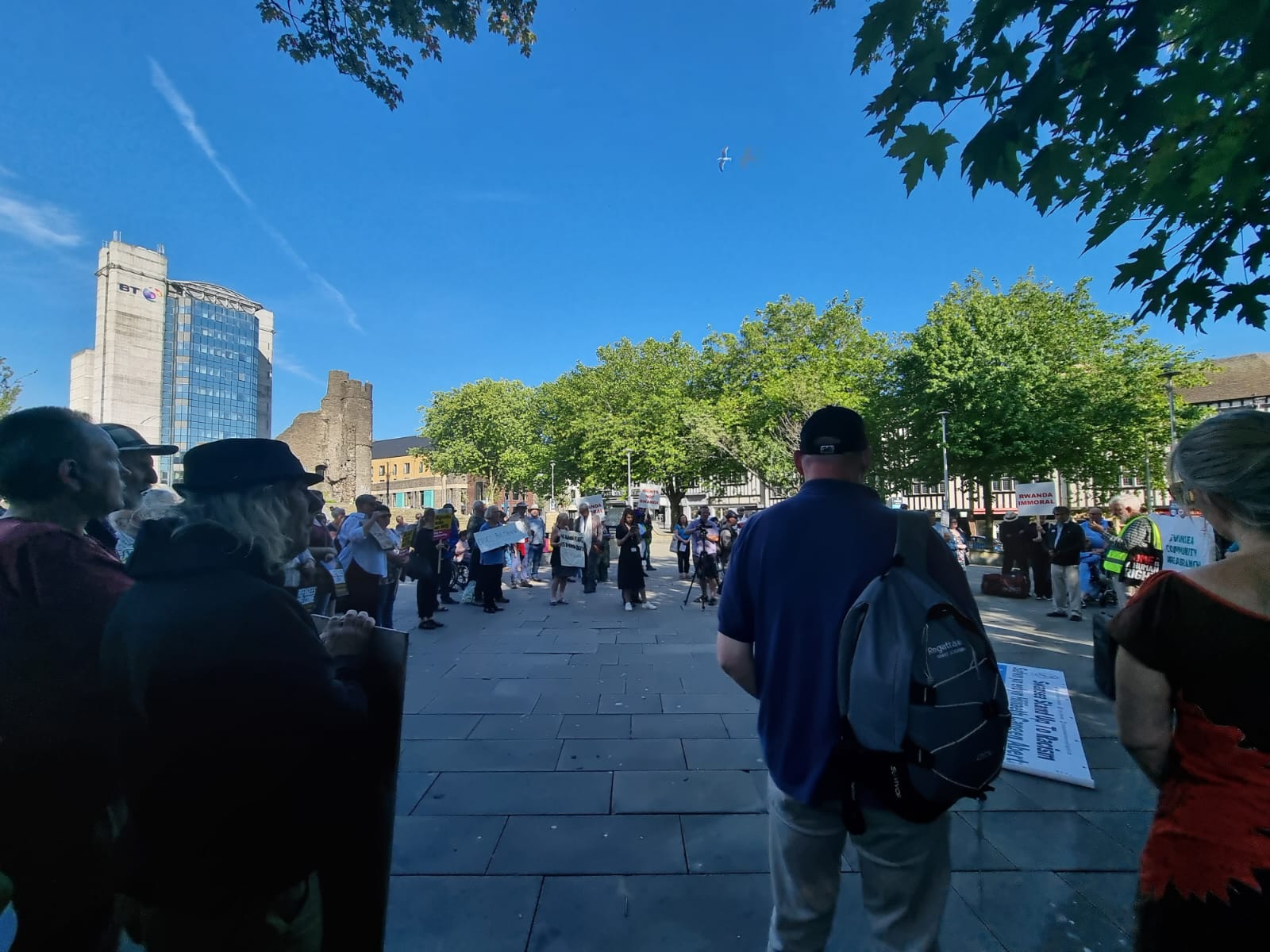 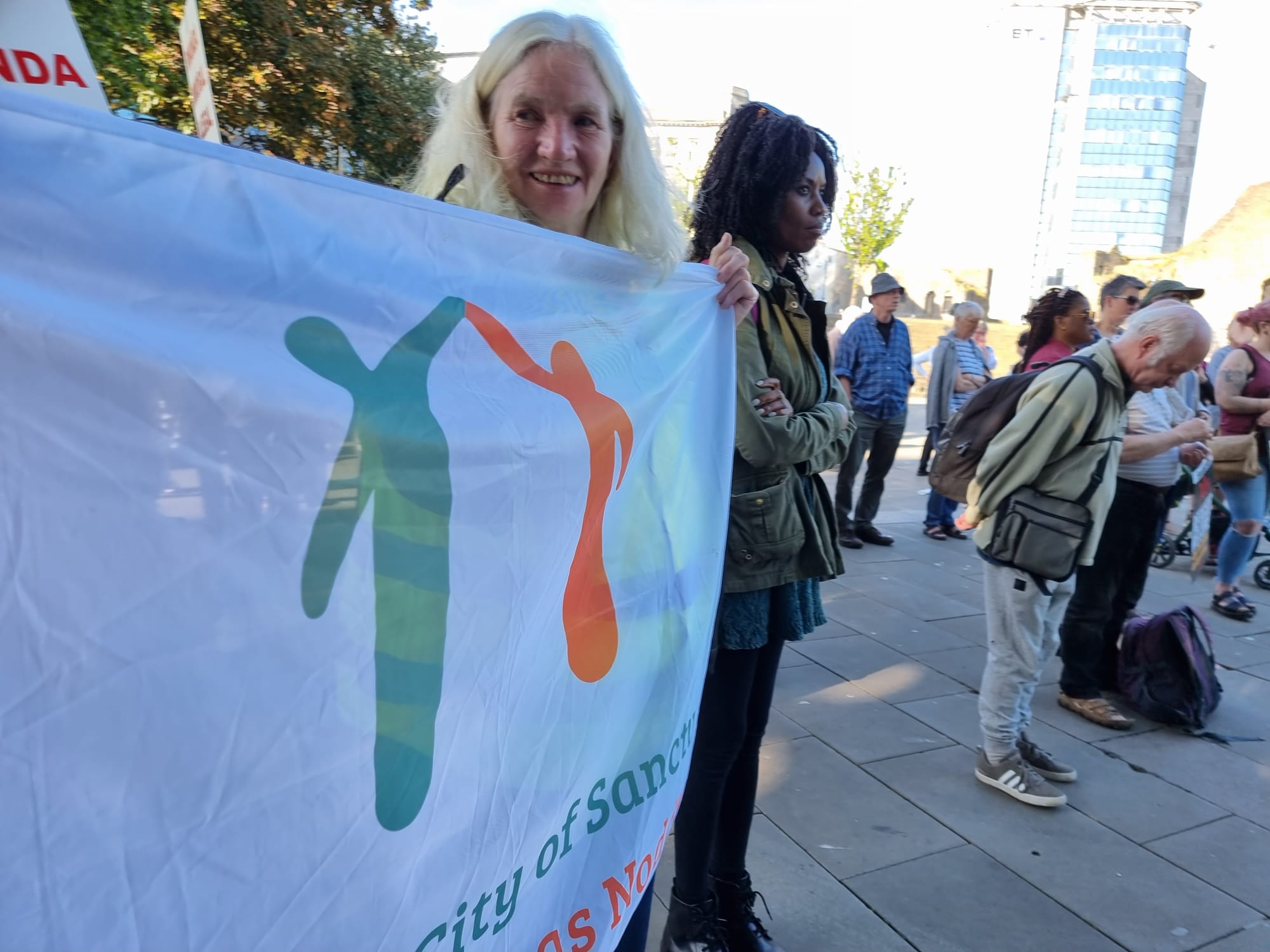