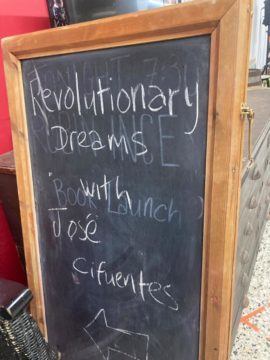 On Friday 12th November 2021, Jose Cifuentes held the premiere of his new film, “Revolutionary Dreams” produced by Malcolm Boorer and Daniel Phillips. This film was based on Jose’s publication “Revolutionary Dreams: From Chile to Wales“, published by Hafan Books in 2016, and available for purchase. Jose very kindly offered the second half of the evening to Swansea City of Sanctuary, to host their Anniversary Sanctuary Awards. 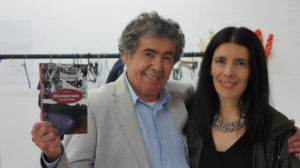 Jose and his daughter Rocio at Volcano Theatre. Image courtesy of Mathew Vaughan.

Shown at Volcano Theatre, the film included Jose’s inspiring story: escaping from the hell of dictatorship in Chile during the 1970s. He and his entire family fled the country in order to survive, to then find sanctuary in Swansea, where they could begin their new life.

The film showed the suffering of shanty town dwellers in the city of Talca, who lived in poor conditions, without water or electricity, in extreme poverty. They do not have the minimum necessities of life. Despite this, there was a new generation of university youth and activists who dreamed of fighting poverty and achieving social justice and peace. The youth movement continued their peaceful demands for social justice, and there were demonstrations in the 1970s, during the Allende era, that persuaded the government to build a modest housing state in Talca.

Jose described in detail his family’s experience on the day of September 11th, 1973, when he heard loud knocks on the door at 7am. The camera moved to Santiago, the capital of Chile, to show what Jose expresses as “indescribable” scenes of the bombing and destruction of the presidential palace.

It was like a political earthquake with a bloody flavour in Chile, after the establishment of a right-wing authoritarian military dictatorship in the country, which lasted from September 11th, 1973, until March 11th, 1990. This seventeen-year period began with the overthrow of the democratically elected Government of Salvador Allende in a military coup, after which the country was ruled by the military junta led by Augusto Pinoche. The army used the collapse of democracy and the economic crisis that occurred during Allende’s presidency to justify this seizure of power.

Jose explained how the regime had pursued a policy of systematic repression of political parties, persecuting dissidents to an extent unprecedented in Chilean history. The regime left thousands dead and missing, tens of thousands of prisoners were tortured, and an estimated 200,000 Chileans were driven into exile. The effects of the dictatorship on political and economic life remained clear in Chile.

Jose lost his home and found himself on the streets, not knowing where to go or what to do, until a public sector engineer allowed him to stay in his house. Jose had to change his name in order to hide. It was then that he visited a church and heard on the radio about the news of violence and continuous assassinations in the country. Jose’s name was repeated over the radio, telling him to turn himself in. He later went to the military barrack, and gave himself in.

After 3 months in prison, during which he was subjected to psychological and physical torture to try and obtain information about the people resisting the dictatorial authority in Chile, they decided to release Jose, as he did not have information. He decided to go to the capital, Santiago, to search for a new life.

Jose described the capital as a theatre of terror. He decided to hide from the public eye, among many other people of different ages who were also living under cover. He spoke of a movement that arose within the Catholic Church that attempted to stand against oppression, save lives, establish peace, and work for people’s rights. The movement itself was subsequently persecuted by the military regime.

The film referred to one of the luminous models during that dark period in Chilean history, Jose Manuel Parada, a social worker, and human rights activist, who helped everyone he could, including Jose. He was alerting people to prevent them from being arrested, until the authorities arrested and murdered him because of his work in human rights.

For many years, secret police were everywhere, in order to catch activists. They were all over the country and never in just one place. Jose continued his life of hiding and moving from one city to another to protect the lives of his wife and very young daughter. 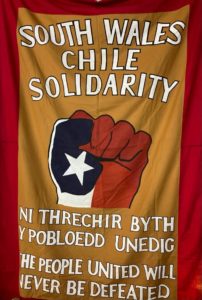 They changed their names many times while fleeing, until eventually Jose started to consider leaving the country, despite his fears of an unknown fate, because he feared for the future of his little daughter.

Finally, with the support of the World University Service, Jose was able to leave Chile for safety in the United Kingdom. Having left their homeland, language, family, and friend, Jose arrived in Swansea with his wife and daughter in August 1977. He got a new chance for a better life, but the horrific events he witnessed, the harrowing experience of living under a dictatorship in the era of Pinochet is still engraved in his memory. However, he now has the privilege to live in a fantastic city, with his dream of sanctuary, freedom, and social justice.

Revolutionary Dreams is now available to watch, in full, on YouTube: