The Wales Cities of Sanctuary project!

Few involved in the creation of the Wales Cities of Sanctuary project back in 2014 would have guessed what the project would achieve. Four years on, as the project comes to an end, Rebecca Scott, the project coordinator and Interim Wales Coordinator for City of Sanctuary, has been reflecting on what has been achieved and hopes for the future:

Central to the project has been the City of Sanctuary method of engaging local groups and organisations to pledge to our vision of a welcoming place of safety for all. 13 organisations were recognised with Sanctuary Awards during the project, including Llanishen High School, Tongwynlais Football Club and the first Museum of Sanctuary, the National Waterfront Museum in Swansea. Two more applications are awaiting assessment at the time of writing. This is just the tip of the iceberg in terms of organisations across Swansea and Cardiff pledging their support to the vision of welcome and safety for all, and actively contributing to making that vision a reality.

We have offered awareness raising training to a number of these groups and organisations throughout the project. 750 people across South Wales reported increased awareness following the project’s training on asylum and refugee issues. Of those people, over 400 have had the opportunity to hear directly from a Sanctuary Speaker – a volunteer speaker who is an ‘expert by experience’ having gone through or currently going through the asylum process.

Eleri Williams, Swansea Development Officer, said:
“Working with the Sanctuary Speakers has been a real honour. Their input and expertise brings the training to life, and makes all the difference to audience members. I’d like to thank them for all their hard work and enthusiasm in the years that I’ve known them.”

Volunteers have also been central to the ‘Welcome to Swansea’ project, which matches volunteer mentors with newly arrived asylum seekers and refugees to help them get to know the city and access services and activities of interest to them. Almost 300 people have accessed the ‘Welcome to Swansea’ project, with 99% of those surveyed reporting feeling less isolated and better integrated as a result. In addition, Oasis Cardiff has provided 145 people with signposting advice to address specific issues. These issues have varied from problems with asylum support, to finding social activities and improving health and well-being. 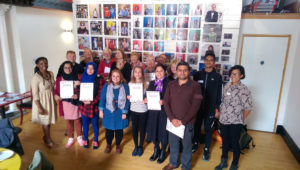 From local support on the ground, we have also taken steps across Wales to build the world’s first Nation of Sanctuary. A personal highlight was the Welsh Government releasing their ‘Nation of Sanctuary Refugee and Asylum Seeker Plan’ for consultation after working with many sanctuary seekers before pen was even put to paper. The TUC Wales also signed a pledge to Wales becoming a Nation of Sanctuary and is using its influence to call for asylum seekers to have the right to work. Bringing together universities has been a real highlight and we now have a ‘Sanctuary in HE Working Group’ regularly meeting in Wales. I am glad that this work is supported by the Welsh Refugee Coalition and really hope that it has gathered enough momentum to keep going without the project behind it. 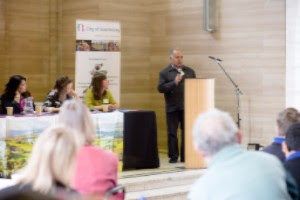 We could go on and on about what has been achieved – the events we’ve been at, the people we’ve worked with, the changes we’ve seen. But more importantly, we want to thank everyone who has made it happen and will continue this work after the project has finished – the inspired individuals who secured Big Lottery funding for this project; the small, dedicated staff team at DPIA, as well as partners at Oasis Cardiff and Welsh Refugee Council; the Directors at DPIA and Committee members at Swansea and Cardiff City of Sanctuary groups for your guidance and support; our amazing volunteers – we could not have done any of this without you; the wonderful groups and organisations across South Wales who have committed to furthering welcome and sanctuaryin their local areas; and finally, everyone involved in our ambitious plan to make Wales a Nation of Sanctuary.