Multilingual World Literature in Swansea: over 30 authors, artists and musicians and more than 17 languages in a unique event series. Meet world writers & performers in events on Friday evenings in April, May & June.

For 3 months, local cross-language writers and artists from around the world will be performing.

The most up-to-date information can be found at the VolcanoFridays website: https://volcanofridays.wordpress.com/  which is available in an incredible 16 languages, or their facebook page.

Yang Lian 杨炼 – multi-award winning Chinese poet, exiled in 1989, now based in Berlin. He performs in Chinese, English and ‘Yanglish’.  “Poetry is our unique mother tongue“

Amani Bakhiet اماني عمر بخيت – poet in Arabic, from Sudan and from Swansea.

Novelist and dramatist Meltem Arıkan with actor and director Pınar Öğün. Their play ‘Mi Minor’ was accused of “rehearsing” the 2013 Gezi Park protests

Now they are based in Cardiff. Their play Enough is Enough is touring Wales in February, with a special performance on 8 April at the Millennium Centre, Cardiff.

Eric Ngalle Charles – Cameroon-born poet, based in Cardiff. As a teenager, Eric spent 2 dangerous years in Russia, thanks to unscrupulous traffickers. His memoirs of those years will be published soon.

Poets and writers in many languages, including members of Swansea’s Poets on the Hill community writing group and the Hafan Books ‘Refugees Writing in Wales’ project.

Preti Taneja प्रीति तनेजा – novelist, poet, blogger, researcher from Cambridge. Her new novel We That Are Young is a retelling of King Lear in modern-day India.

Marie Darrieussecq – best-selling controversial French novelist (Pig Games: A Novel of Lust and Transformation; All the Way; My Phantom Husband; and more). Also translator of Ovid, Joyce and Woolf.

Nia Davies – born in Sheffield,  based in Swansea, learning Turkish, poet and editor of Poetry Wales.

Jörg Bernig, multi-award winning poet, novelist and essayist; he lives near Dresden and has written several stories set in Swansea – in English.

Wioletta Greg [Grzegorzewska], best-selling Polish novelist, poet, editor and translator; she has lived in England since 2006.

Maram al-Massri  مرام مصري   – poet, born in Syria, based in France. She has published several books of poetry in Arabic and in English, French, Italian and Spanish translations, among other languages.

Humberto Gatica – poet and prize-winning photographer from Chile, from Swansea.

Educational psychologist José Cifuentes has lived in Swansea since 1977 when he came as a political refugee from Chile. He has written his memoir of the Allende and Pinochet years in Spanish. His daughter Rocio (director of EYST) translated the text into English and also prepared the Spanish text for publication.

Jean Portante, born in Luxembourg, is a prize-winning francophone novelist, poet and playwright and a translator from English, Spanish, Italian and German. 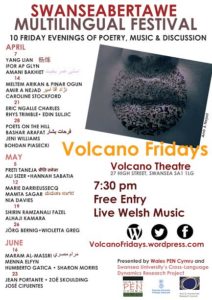