Stand As One Rally

Last Saturday saw hundreds of people gather in Swansea’s Castle Square to welcome and celebrate people seeking sanctuary in Wales. The rally, organised by Oxfam Cymru with support from ourselves, Displaced People in Action, Save the Children, HOPE not hate Wales, Christian Aid, Stand Up to Racism and others, coincided with a large march taking place in London and ahead of two major summits focusing on migration taking place this week. 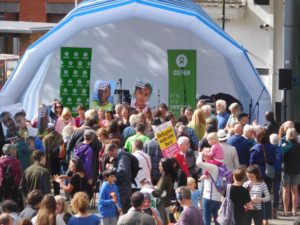 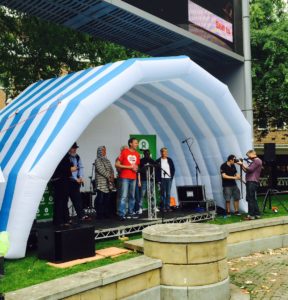 The rally brought together people from all walks of life who support refugees and asylum seekers, and who want to see world leaders take action on the refugee crisis. Also in attendance were politicians from Plaid Cymru, Labour, and the Conservatives. 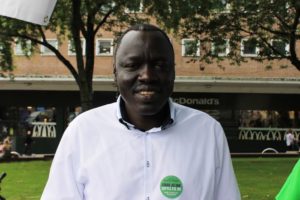 Abdalla, a valued Sanctuary Speaker volunteer who spoke at the Stand As One Rally.

We were honoured to contribute to the rally by providing three speeches, in amongst the poetry and the musical performances. Abdalla, a Sanctuary Speaker volunteer spoke candidly about some of the difficulties he has faced, despite receiving his refugee status last year. He began by sharing his background in Sudan, and through his work for INGOs (including Oxfam) he was able to see how little human life had been respected back home.
“It’s often said that determination of an asylum claim is the end of the story, but it’s not the case in my experience. I got my status but my National Insurance number and my Biometric Residency Permit were created with two different names, I returned the residency permit on November 27th 2015 and I didn’t receive the correct version until 18th July 2016, after approximately 8 months despite repeated and persistent enquiries and also the support of my M.P.”
Read abdallas-speech 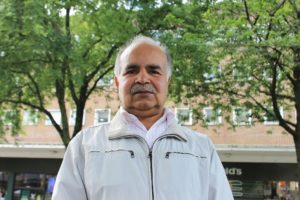 Tahir, a valued Sanctuary Speaker volunteer shared his experiences at the Stand As One rally.

Tahir, another Sanctuary Speaker volunteer was keen to emphasise that the term ‘refugee’, “is neither a substandard individual nor a hateful term,” highlighting the remarkable experiences of several refugees including Mr. Michael Marks, of Marks and Spencer fame. He focused on the impact not being able to work has on an individual, but also the UK economy as a whole.   Read tahirs-speech

“City of Sanctuary is what our supporters do- this includes you. Yes there are challenges but there are also huge opportunities. With your help, together we can make welcome THE reality for people seeking sanctuary in Wales.” 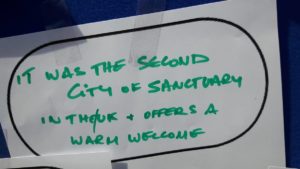 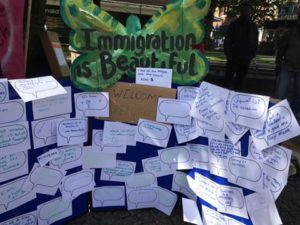 The rally was an excellent opportunity for Swansea residents to come together to show their support for people seeking sanctuary. We thank Oxfam Cymru for inviting us to be part of the day, and we thank our supporters for allowing us to share their photos.