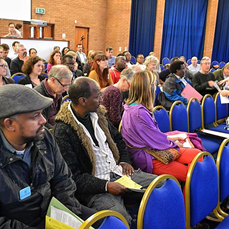 By Becky Lowe, on Behalf of Swansea City of Sanctuary.

Swansea asylum-seekers and refugees have been helping make history at the first ever ‘Sanctuary Summit’, a national conference dedicated to tackling asylum issues.

The conference, held in Birmingham earlier this month, attracted more than 400 people, including refugees, migrants, advocates, Members of Parliament, and supporters from more than 100 civil society organisations across Britain.

In a history-making statement, they voted unanimously to work to stop the tide of negativity facing those who came to Britain’s stores. Conference-goers declared they could no longer watch in silence as thousands are left to drown while fleeing for their lives, and others find themselves warehoused in refugee camps, barred from travelling to safety in the west.

Swansea delegates played a central role in the conference. As one of the first cities to be recognised as an official City of Sanctuary, many spoke movingly about the welcome they had received and highlighted popular initiatives including asylum-seeker drop-ins, legal advice, and housing support via the SHARE Tawe scheme.

Swansea attendee Maria Shafayat said: ‘The Sanctuary Summit was all about encouraging empathy for refugees rather than sympathy, and enabling asylum seekers a fair chance to follow their cases and be involved in discussion of basic human rights. Going to this event has motivated me that we can work together and show how we feel in unity, and build hope for positive changes.”

Swansea delegate Max Kpakio told conference-goers how the city is using arts to engage the wider community. He said: ‘The conference highlights the need for us all to work together in the quest for campaigning for better policy on immigration in the UK. Such events are important because they bring together like-minded people to work on issues collectively.”

Participants spelled out their position in the “Birmingham Declaration”, a set of principles and ‘asks’ that have already been signed by 26 national and regional organisations. The declaration affirms Britain’s long tradition of offering protection to those fleeing persecution, and its reputation for fairness and justice. It goes on to say that most British people are sympathetic towards those who come here seeking protection, and asks for an end to destitution and indefinite detention. It is planned to carry on gathering support for the Declaration across the faith, community, public and private sectors, before sending it to all party leaders.

“Let’s reclaim the centre ground of political debate with empathy, compassion and common sense,” urged Refugee Council Chief Executive Maurice Wren. “Working together we’ll drive those who denigrate and demonise migrants to the extremes where they belong.”
The full statement of the Birmingham Declaration can be found
here.