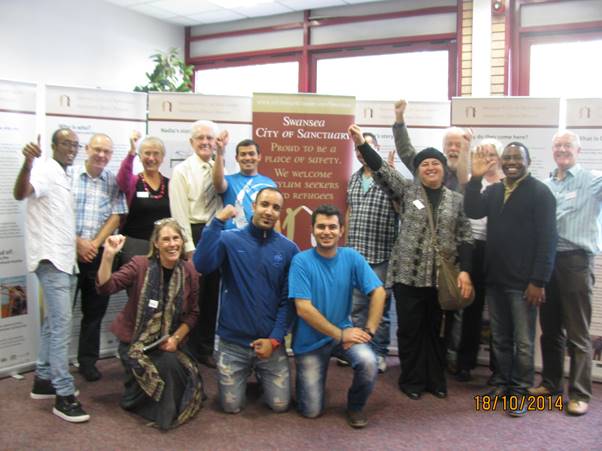 On 18th October 2014 more than sixty people from across South Wales attended a conference entitled ‘Asylum Seekers and your Church’.

The conference, which was organised by a local steering group, began with an Eritrean group singing worship songs in their own language, Tigrinya.

Jim Stewart, National Assembly Liaison Officer for EA Wales set the framework with a talk on ‘The Theology of the Stranger’

Sian Summers-Rees and Ruth Brown from Asylum Justice spoke on the Asylum Process giving a useful insight into the way the system ‘worked’ and providing practical examples from their own experience.

We heard from Shaida who told the challenging story of her family’s journey from Iran to Swansea via Cyprus. Ken Robling, one of several local ministers present, told how many asylum seekers had been helped and supported in their asylum applications and were enthusiastic in their church attendance.

An amazing hot and cold Iranian style lunch was enjoyed by all delegates, speakers and support team.

A Question and Answer provoked some useful discussion.

Many attendees commented favourably on the programme and a number of people are interested in volunteering for Swansea City of Sanctuary and other organisations as a result .