As a Swansea City of Sanctuary supporter it’s more than likely you’ll have met two of our biggest supporters, Alan and Marilyn Thomas.

Three years ago, Alan and Marilyn undertook a ‘Big Walk’ of the Wales Coast Path, in order to raise money for SHARE Tawe, Swansea’s own voluntary hosting scheme, and the Welsh Refugee Council‘s Hardship fund, both of which support destitute asylum seekers. 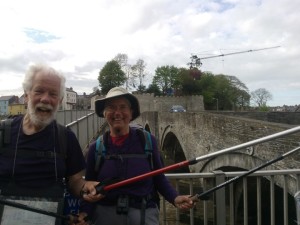 In the time since, Marilyn has taken over the coordination of the SHARE Tawe scheme, which has seen it go from strength to strength. In 2015 alone, the scheme accommodated 17 people, 10 women and 7 men. Stays have ranged from 3 days (unusual) to 11 months and overall, SHARE Tawe provided approximately 1732 bed nights.

Whilst the growth of the scheme is a positive example of volunteering, support for Swansea City of Sanctuary and most importantly those who have been left destitute through no fault of their own, the fact that destitution is a growing problem throughout the UK, remains very concerning.

Given this context, Alan and Marilyn have decided to continue their walk, this time focusing on  the ‘next steps’ of the Wales Coast Path. Like before, they are not taking the car, just carrying what they need from place to place, but this time just for one week.  In that time they hope to carry on from where they left off in Cardigan, and get as far as Littlehaven, a total of 85 miles of which they aim to walk at least 60 (taking buses for the rest).

Please consider sponsoring them via their JustGiving page, or if you are in a position to do so, please support SHARE Tawe with a regular standing order. They are aiming to raise £2000 which will be split between  SHARE Tawe and Welsh Refugee Council (WRC). WRC also helps destitute refused asylum seekers here in Wales. They give small amounts (£5 or £10 per week) through their Hardship Fund. They reach many more people than SHARE Tawe, enabling them to keep going at the most basic level while sofa-surfing or sometimes even living on the street.