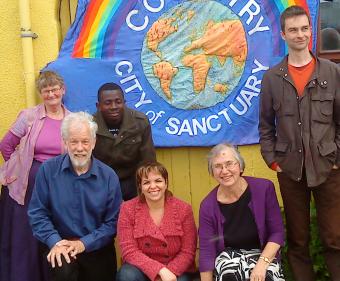 Amel came to UK seeking sanctuary from Algeria and has been in Swansea for six years. She now has ‘leave to remain’, together with her husband and five children.

Amel says: “At the moment I am a stay-at-home mum. I can’t work because my youngest isn’t in school yet but I am studying for a Health Studies degree with the Open University, so I will be able to get a good job in the future. I want to feel useful so I do a lot of voluntary work. I’m in the Refugee Speakers’ Team [run by Displaced People in Action] and enjoy explaining to people about what is an asylum seeker or a refugee. I am one of the organisers of the Swansea Women’s Asylum Support Group. I also volunteer with SBASSG [Swansea Bay Asylum Seekers support Group] and Peace Mala and have just started with the Welsh Refugee Council. It feels great because it’s useful to the community and it’s a way of giving back something.

“I enjoyed the trip to Coventry very much, especially meeting people from other City of Sanctuary groups and listening to what they are doing and intend to do. It’s a really good thing for Swansea to become a City of Sanctuary – I am very proud. And Swansea deserves this recognition because people are so friendly and welcoming here.”

Read more in our June Newsletter